Time is running out

I come back to the States in less than a week (I know you're all very excited to see me).

The last few days I have spent in Jerusalem. Most of my time was spent in the old city, which is this extremely confusing maze of alleyways that is completely walled in. Most of the alleys our filled with shops. I'd say there around two thousand little shops set up in this tiny area with only about ten different kinds of stores (Jewish souvenirs). It is quite an experience just walking around this area because once you get into the alleyways, every turn you take just leads to more alleyways, and unless you know your way around, it is extremely difficult to find your way out. 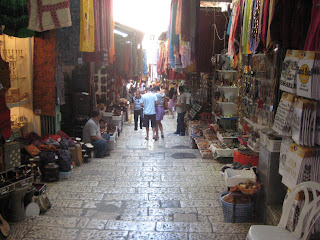 This area is also unique since it holds extremely holy spots for three major religions. Obviously, the Jews have the wailing wall here (which is only holy because it is close to where the old temple used to be), the Muslims have the Dome of the Rock (Which is actually a monument built where the old temple used to be (Yes, the holiest site in the world for Jews has a Muslim memorial on it)), and the Christians have the tomb of Christ here in one of the churches (I accidentally walked into the church and saw a big line for something so just stood behind it, so I got to see this).

A picture of me (pretending to be) praying on the wailing wall. 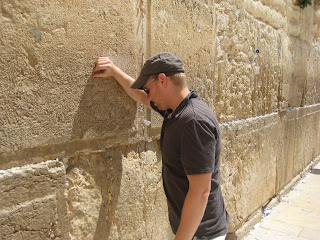 The last day I was in Jerusalem I went with some guy I met in the hostel to Bethlehem (Yes, 'The' Bethlehem) and Hebron (Yes, a Palestinian city in the west bank). Guess what everyone! I have seen the place where Jesus (Yes 'The' Jesus) was born, and you haven't. Does this make you feel inferior to me? 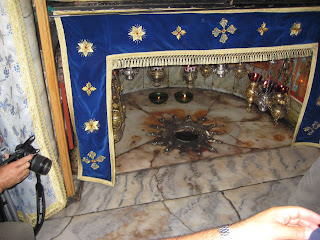 The other interesting thing about Bethlehem is that it is right next to the wall that the Israelis built around the west bank to keep out Palestinian suicide bombers. We tried to walk through the checkpoint here, but the guards were being mean to everyone and there was a huge line (I was like, "Excuse me! White person here, no security necessary), so we drove through instead, but still interesting. 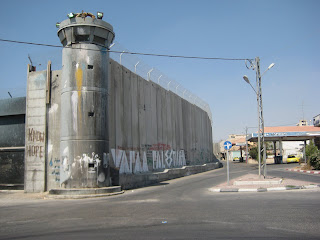 Hebron wasn't really that exciting. I expected all kinds of Mayhem and violence to ensue, but it was just like all the other cities I have been to....only we were the only white people there. However, we did see a box of goat heads (Warning: graphic image....too late). 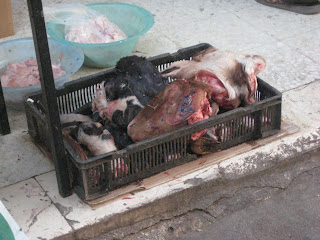 Every place I have gone, people have extremely overstated how bad/dangerous the area will be. So, as a social experiment I will go to Gaza (Just kidding).

Oh yeah, also in Hebron this little kid was selling band aids on the street. He kept coming up to me and offering me a band-aid for a shekel (I found this quite funny. Why would I need band-aids?). In the end I gave in him an 'A' for originality and gave him a shekel. He gave me a whole pack of like twenty band-aids (So, if anyone needs a band-aid I will be bring back twenty next week....but they are Palestinian band-aids).

Quick note about Arabic. They don't have a 'p' sound. It just doesn't exist for them. So, they pronounce all the English words with a 'b' sound instead. This can get quite comical....just imagine the possibilities. 'Pepsi' becomes 'Bebsi', 'Pop' becomes 'Bob'.
Posted by Unknown at 11:51 AM 1 comment:

In memory of Tom Brady (Is that pessimistic?)

If you have any spare time, you should check out Jordan.

In Wadi Rum we went off road through the desert for an entire day. Our tour guide Ali (Everyone I have met in Arab countries have been name Muhammad, Achmed, or Ali) was hilarious, but pretty crazy behind the wheel. He was flying up and down sand dunes, weaving in and out of rock, and just generally going as fast as he could. We stopped for lunch in the afternoon and the dude made a fire and cooked us some chicken right there.

I did some extremely hard hikes up cliffs, sand dunes, etc. (Thank god I am in such amazing shape). By the way, hiking up a sand dune is quite difficult as sneakers and sand don't mix well. 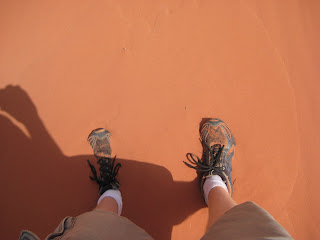 I stayed the night in a Bedouin tent, but ended sleeping outside under the stars (How romantic). We went on a Petra by night tour which consisted of walking through the Petra canyon, then sitting there while some dude played some crazy music and told a story. I slept through the whole thing (Yes it was boring, but I had taken a midnight bus from Tel Aviv to Eilat in order to start my tour in Wadi Rum, so I was quite tired).

Next day, we went Petra by day. Petra is basically this giant natural canyon that leads into a town of some ancient civilization. As stated before, this is where some of the final scene of Indiana Jones and the Last Crusade were filmed (They are sill obsessed with this here. The guide started playing the Indiana Jones music on his cell phone once we got there). It was quite kind of this ancient civilization (Like 2000 BC? Maybe I made that up) to make all this cool stuff for us to look at now. It really is some of the most impressive sites I have ever seen. Also, the area is very rich in minerals so the rocks come in many different colors.

In the afternoon (The hottest part of the day), I hiked up this hill (900 stairs) which took about 50 minutes. It sucked. I have never been so sweaty in my entire life. 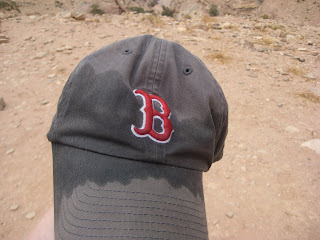 I don't usually drink tea, but I drank it non-stop while I was there. Everyone offered it. That's it....random thought.

After I came back from Jordan I stayed in Eilat (The southern tip of Israel, and party central) for two nights. Very fun, very beautiful, very drunk. It is located at the tip of the red sea, and is bordered by Taba, Egypt and Aqaba, Jordan (Its pretty cool to look across the water and see Jordan on the other side). I met some couple in Eilat and ended up hanging out with them most of the time (Good thing cause they were in a nice hotel). 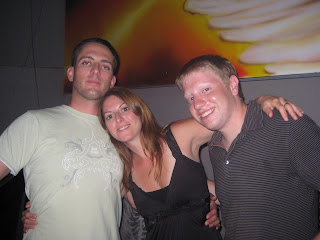 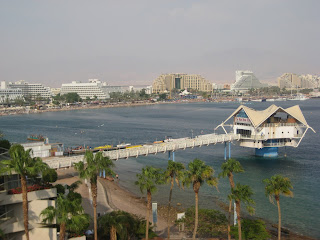 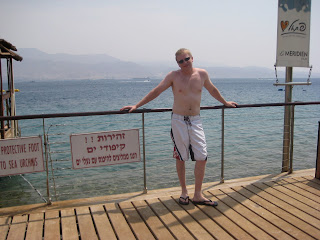 Hmmm I am getting fat.

The only problem with Eilat is that is probably the hottest place I have ever been. It averages around 40 degrees (that's Celsius, or 105 degrees Fahrenheit for all you Americans (Actually, probably everyone reading this is American)).

Today, I went to the beach in Tel Aviv with some of the friends I have made here. I have met tons of people now since I have been here that I go and hang out with somewhat regularly (Seriously, I think I have made more friends here, than I do in a year in the states (But, of course I'm really not that cool in the states (Maybe its because finally I found a place where they are willing to accept a blond hair, blue eyed Jew))). 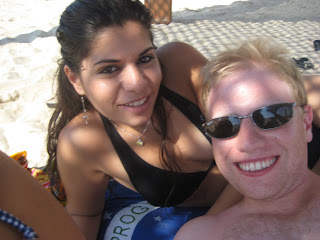 Posted by Unknown at 2:49 PM No comments:

The Hashemite Kingdom of Jordan

OK, so I'm really tired right now because I have been up past 5 AM the last few night partying in Eilat (Its the spring break spot of Israel). I want to talk about my trip to Jordan, but I need sleep. All I will say is that Petra is one of the cooler places I have ever been. And now I let the pictures do the talking. 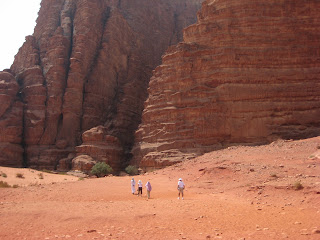 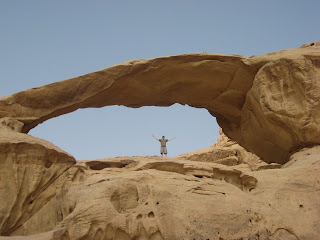 Petra, Jordan (You may recognize from Indiana Jones and the Last Crusade) 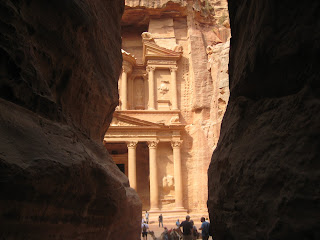 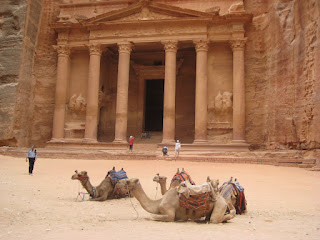 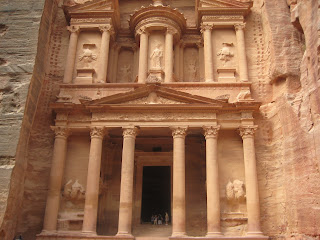 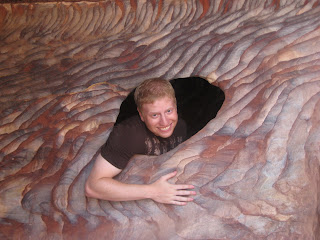 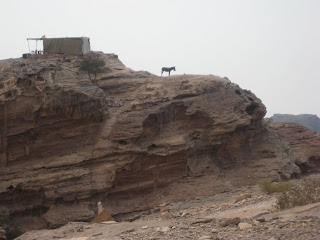 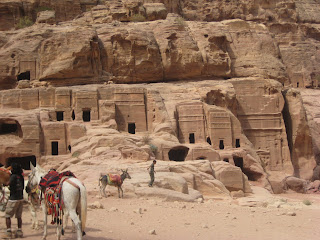