It's clear to see when traveling abroad, that there is a higher percentage of overweight Americans than there should be. Here in Israel, obese people are few and far, far between. Why is that? They have plenty of fast food. They have plenty of soda. My guess is because they have outdoor playground gyms for adults. Yes, playground gyms. They have all your favorite exercise machines from the elliptical machine to the seated chest machine in playground format. Last night, having not much to do, my cousin, her friends and I, took our turn on the workout jungle jim. 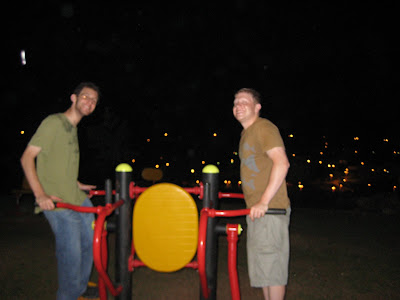 Now, I am at my other cousin, Ayellet's, house (I thank my uncle for having so many children that I can stay with). All day today I saw a lot of family. 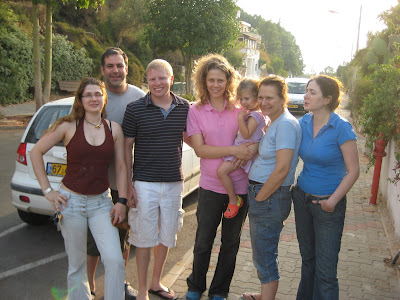 I was in Israel back when I was 10 years old (Hmm that's like 15 years ago. I feel old). The image I remember is looking out from my Aunt's house over a valley containing a Palestinian settlement. This is exactly the image I came back to on my current trip. It seems that everywhere in Israel is either a hill or a valley (It does have the lowest point on earth at the Dead Sea). Check out the view from my cousins house. 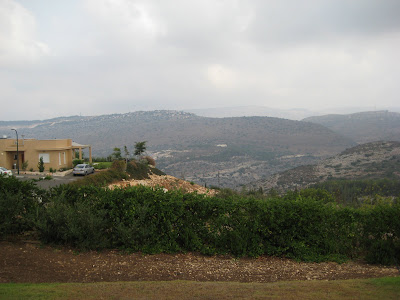 Its pretty much like this everywhere. We went to Haifa the other day and saw the Baha'i Gardens. You've got to give it to those Baha'ians, they sure know they're gardening. 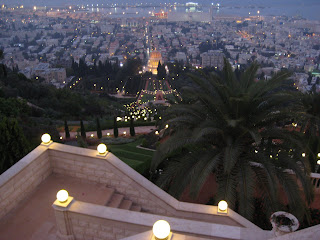 We took Agami (The 3 year old) to the park down the street today and there was a petting zoo in the park (weird). Apparently this is quite common in Israel. I saw all kinds of new and exciting species (Goats, Chickens, Ducks). 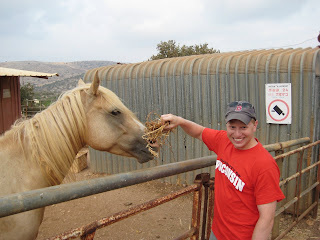 I look pretty American in my Red Sox hat and Wisconsin t-shirt (But don't tell the horse, he's Arab.....too soon?).

Tomorrow I go to my Aunts house in Ariel. A map of Israel for your convenience. Can you find Ariel? Can you find Akko, where I am now? Please let me know if you do, cause I have no idea where I am.
Later this weekend I am going to Egypt, despite travel warnings about the country (cause I'm a bad ass). Hope I live to write again.
Posted by Unknown at 4:07 PM 2 comments:

I have been picking up ridiculous amounts of Hebrew since I have been here. I know at least 15 words now! My cousin's daughter (I guess that makes her my second cousin) Agami just turned 3. She understands when I speak to her in English, but will only answer me in Hebrew...damn kids. 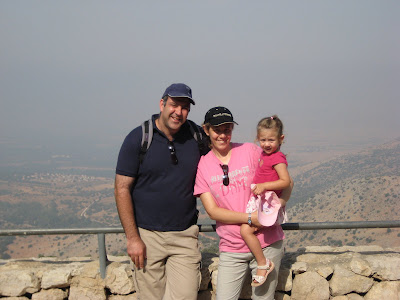 Awwww! Matt does have a sensitive side.

When I told all my friends (3 of them), that I was coming to Israel, the first thing everyone said was "Don't die!", or something to that extent. The assumption that Americans make, that Israel is an unsafe place is completely unfounded. I have never for one second felt the least bit unsafe.....until today. Today was a big day in my life; I encountered my first scorpion. The scorpion and I fought it out for a while, but in the end, size appeared to matter as it succumbed to the Levin smash (Actually it was dead when we found it, but shhhhh). A minute later I found some sort of giant centipede thing as well. I am now terrified of this place and wish to come back to America. 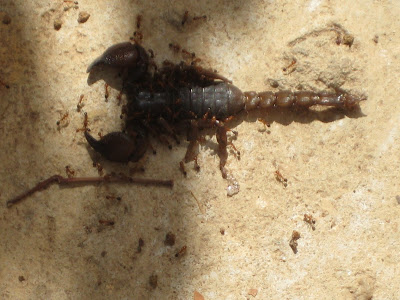 Just as lots of Americans have misconceptions about Israel, Israelis seem to have misconceptions about America, or one American in particular. A lot of people here seems to think that Barack Obama is a Muslim. There seems to be a fair amount of Republican propaganda circling the country. It's no surprise that the one America news channel I found was Fox News. This is probably due to the fact that Israel hasn't had the best relationship with Arab nations (See 6 day war, Yom Kippur War, Lebanon War 1 and 2, etc.) and in their eyes, Republicans are taking a "harder" stance against the Arab world. I have talked to a number of people here who want to pre-emptively strike Iran.

Enough politickin. One last photo that summed up Jerusalem for me.....crazy Jews (Can you tell which one I think is the crazy Jew). 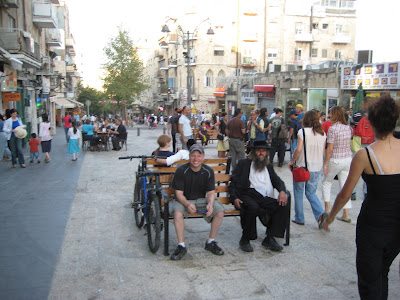 Posted by Unknown at 4:55 PM No comments:

I am currently sitting in a bunker at an Israeli outpost on the Syrian border. There has been a constant barrage of rockets being fired at us throughout the night.....

I have been on my trip now for over 10 days, but haven't really had consistent access to a computer. So, today I start this blog. We'll see how much I actually keep up with it.

First, a summary of what I have been doing:

Aug 6: I went to the airport and met the 40 other people I would be going to Israel with for my birthright trip. Played "fun" ice breaking games, blah, blah blah. Leave USA.

Aug 7: Arrive at Ben Gurion Airport in Israel. Meet our tour guide, Yariv (Cool dude). Meet this guy Momo who runs Oranim (the birthright group I am with). He's crazy! 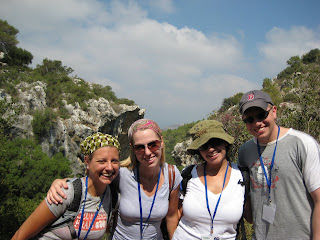 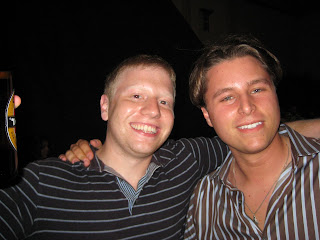 Aug 9: Since it is Saturday, we are not allowed to use the bus (Jews have this thing on Saturday call Shabbat where no work is supposed to be done, and apparently driving is work). Instead we walk to the Beach on the Sea of Galilee or the Kinnereth for all you Israelis. It is hot. My white skin burns.

Aug 10: Go to the Golan Heights at the Syrian/Lebanon border (watch out for land mines). Visit an Israeli outpost where this dude shows us some sweet machine guns, etc. We slowly Kayak down the Jordan River, which is really more like a stream. 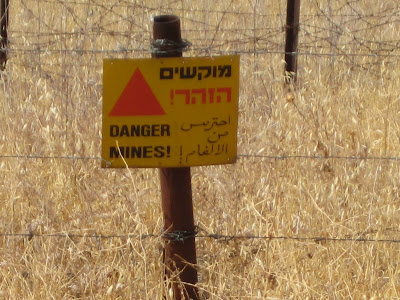 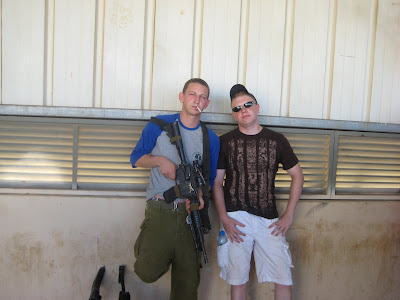 Aug 11: Meet up with 8 Israeli Soldiers who will spend the rest of the time with us. Go to Tel Aviv. Blah blah blah. Go out to the desert somewhere to some Bedouin tents. Ride a camel (watch out, they spit). Don't sleep. 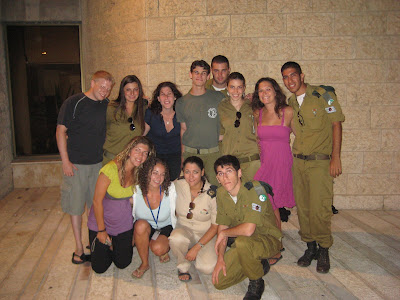 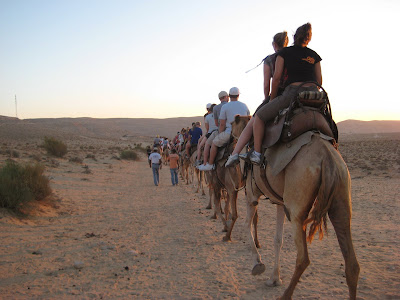 Aug 12: Get up at 3AM to hike up Massada and watch the sunrise. Cool, but I'm too tired to care. Go float in the dead sea. Yes, you really float. I recommend checking it out. Go to Eilat, which is like the spring break spot of Israel. It is sooooooo hot. It is the southern tip of Israel. Go to some incredibly overpriced night club and get jiggy wit it. 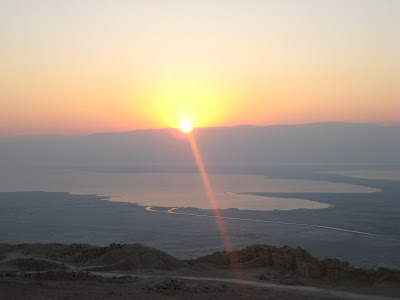 Aug 14: Check out the old city of Jerusalem and hit up the Western Wall (its just a wall....am I going to hell now?). 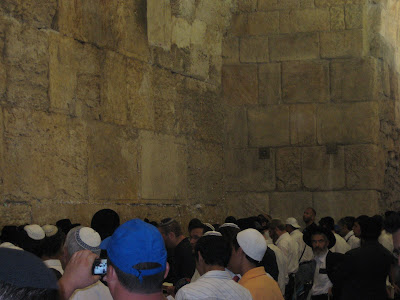 Aug 15: Go to Yad Vashem (Holocaust museum)....depressing. Go to the Western Wall for Shabbat. There are thousands of people all dressed up in their Jewish clothing praying and dancing and singing. It is Jew heaven. Leave the holiest Jewish site on earth and go straight to a bar. Praying ensues. 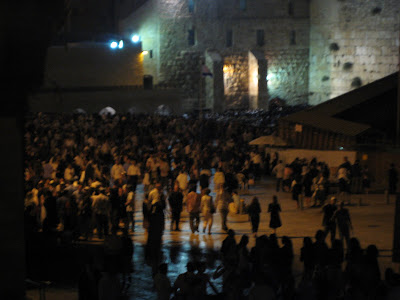 Aug 16: Another Saturday so we can't do much. Go to Tel Aviv for closing session with crazy Momo guy. I extended my trip so I need to find a place to sleep in Tel Aviv. Unfortunately it is the crazy busy season and it happens to be the Hebrew Valentines day. I walk hotel to hotel, hostel to hostel until I find a hotel with a room for the night. Its 500 Shekels (~$140) but I can only stay from 1:30 - 10:00 because they also rent to the rooms by the hour....sketchy. There are mirrors on the ceiling. Say good bye to all the peoples on my trip (very sad).

Aug 17: Split my day between getting lost in Tel Aviv, taking naps, and talking to random tourists at the bar. Go to some club at night and meet a nice Israeli girl who's name I can't pronounce. I think there is potential for a Jewish marriage.....nah. Sleep at a low end hostel, but it still an upgrade from the night before. 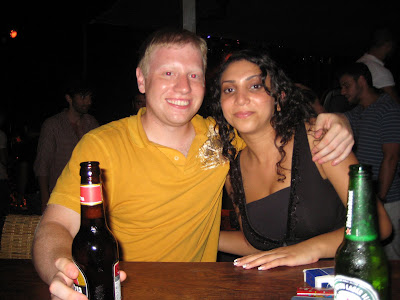 Aug 18: Take a train to Akko where my cousin picks me up. Go to dinner in Haifa with my other cousin Aviva.

Aug 19: Go to Akko and check out Templar ruins from 1000 years ago. Go and see Mummy 3 (I can't believe I just admitted that). For those wondering, dragons appear in the movie for approximately 45 seconds. Unfortunately, Brendan Frasier appears for 90+ minutes.

That's up to date now. I can't believe you just read that whole thing. More details to come tomorrow.
Posted by Unknown at 4:00 PM 4 comments: