A Monkey, a Crocodile and a Llama Walk into a Bar...

Lets get right to it:

I went to the Bolivian Jungle 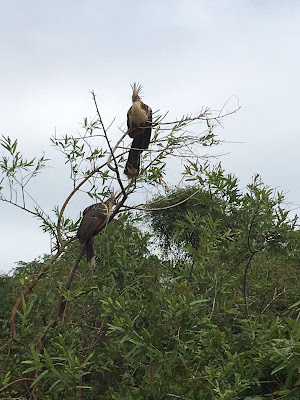 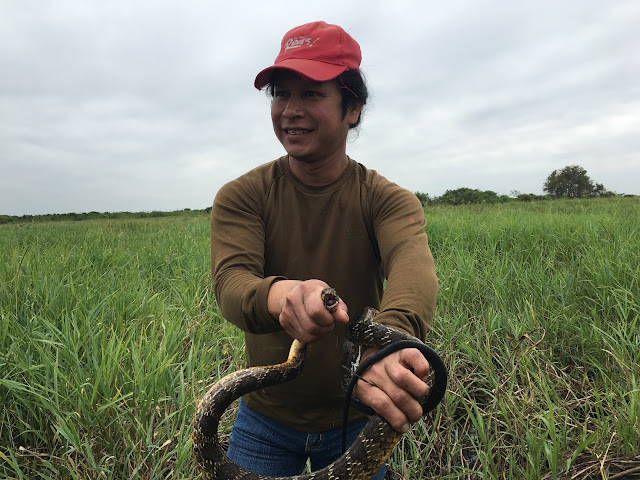 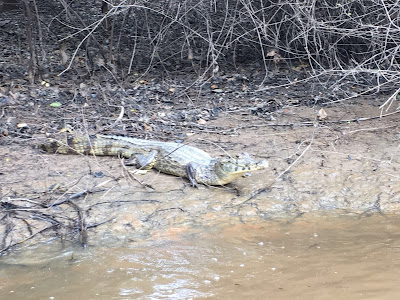 
Did I mention I went to the Bolivian Jungle? And guess who I ran into right in the middle of the Bolivia Jungle. This die-hard Wisconsin fan:

Well actually he didn't know what the 'W' stood for and he couldn't even pronounce Wisconsin, but I think I turned him into a believer. He's definitely going to be watching the next game (if he can find a TV in the jungle....a TV thats playing a Wisconsin game..in Bolivia).

But I did go Anaconda hunting, which is way more dangerous than those "diseases". The good news is I didn't get attacked by an Anaconda (should that be capitalized?). The bad news is I didn't see any Anacondas. We did see a couple of snakes though, which the guides called a Cobra (that seems like it should be capitalized) and a Rattlesnake (although they did not resemble a Cobra and did not have a rattle...so perhaps they were just making that up). But this one was pretty big (insert thats what she said joke here):

For two hours we were hiking through knee high grass and ankle high water completely unable to see our feet or the potential snakes that we were about to step on. But I wasn't scared...as this picture clearly shows:


And snakes weren't the only animals we saw out there (clearly, because I posted pictures of other animals above). We saw the elusive Capybara...or as I like to call them, the mutated-rabbit-guinea-pig (similar to man-bear-pig).

And as is clear by now, there were crocodiles. We went out at night to see them when they are more active and aggressive (cause we're bad ass). When you shine a flashlight at them, their eyes light up yellow and orange. That night, I was attacked by a crocodile (seen below), but I think I got the best of him:


And of course there was the obligatory Piranha hunting (seriously, who would go to the Bolivian jungle and not fish for some Piranhas?)

I don't actually eat fish, but I am told that they were delicious....but boney.

And here's what they looked like cooked. I have been having nightmares of this guy for weeks.

Other than that there was lots of monkeys, riding boats down the river, jumping off a rope swing into the water with crocodiles on the river bank literally 50 feet away and sitting in hammocks drinking beer.

But the highlight of the trip was eating at the highest burger joint in the world (at the airport).

Before we move on to our next country, I wanted to share one more thing that happened in La Paz. There is an area known as the Witches' Market that sells all kinds of potions and herbs and witch-ey things (like flying broom sticks). The most interesting thing they sell (in my humble opinion) would have to be Llama fetuses.


Those are not stuffed llama animals...those are real llama fetuses.....and they're delicious. No, I'm kidding. That would be ridiculous to eat them. Instead you're supposed to bury them in the place where you are constructing a building as like a sacrifice to something and then that building is gonna turn out a-ok. And you thought I ate them...pssssh.

Sorry, one more thing before we move on; Q&A:

A. Well Matt, thats not actually a question, but yes you're right. But there's just a lot of coca production in general in these countries and its not all for illicit purposes. Coca leaves are great for altitude sickness, so you can find all kinds of coca products here; leaves, candy, tea, cake, etc. This is not cocaine. But yes, a lot of coca that is produced goes to making cocaine (and there's even a cocaine bar in La Paz). While traveling through the remote areas of Bolivia/Peru you will see many coca fields and you have to wonder....is this where coca-cola was invented?. There's an interesting book about the Bolivian cocaine trade (or really more about the Bolivian prison system), called Marching Powder.

And now lets move on to Peru!

A couple quick observations to start with:

For the month of June, I am staying in Cusco Peru, but for two weekends I stayed in Lima. Did you know "During the Spanish Viceroyalty of Peru, lima beans were exported to the rest of the Americas and Europe, and since the boxes of such goods had their place of origin labeled "Lima, Peru", the beans got named as such". So really we should be calling them Lima beans and not lima beans #funFactsWithMatt

The first time I went to Lima, it was for Remote Nation. As you may be aware, I am on this program called Remote Year. I am actually on the third trip they setup. The first trip started last June (and finished at the end of May) and the second trip started a month before me in February. Since all three groups were in South America, a meet up was held in Lima and bore the name Remote Nation. The actual Remote Nation part wasn't that great or interesting, but the Lima part was cool. Oh, I guess it was interesting that Remote Year 1 was on their last week of the year and it really just became a total mind f*ck thinking about going back to "normal" life....with all you "normies".

Lima has ridiculously good restaurants. There is sooo much ceviche. I don't normally eat fish (see piranha reference above), but I found I really like ceviche (cause it doesn't taste or smell like fish).

I went on a food tour while I was there and now I'm fat. Here's a picture of some chef preparing some ceviche that made me fat:

So good food. But also the ocean, or as they say in Spanish, "the ocean"...since I'm clearly a gringo and don't speak Spanish so they speak to me in English. Here's a picture of a mall I spent a lot of time at on the coast:

And because, why not, a bunch of us decided to get a sweet Airbnb on the ocean outside of Lima for the night.

The other weekend I spent in lima started on June 2. Do you recognize this date? You should, cause its the day Babe Ruth announced his retirement in 1953 (apparently). It also happens to be my birthday. I had originally wanted to go to Colombia for my birthday but it was complicated so I ended up in Lima #RoughLife. And guess what I did in Lima for my birthday...I ate more food and got even fatter.


Unfortunately, I can't speak any Spanish so I'm not sure what it says. I'm guessing something like "Happy Babe Ruth Retirement Day Matt". I really do have the best friends here.

For dinner, we went to this bomb Amazonian fusion restaurant called Amaz. I recommend it when you're in Lima. 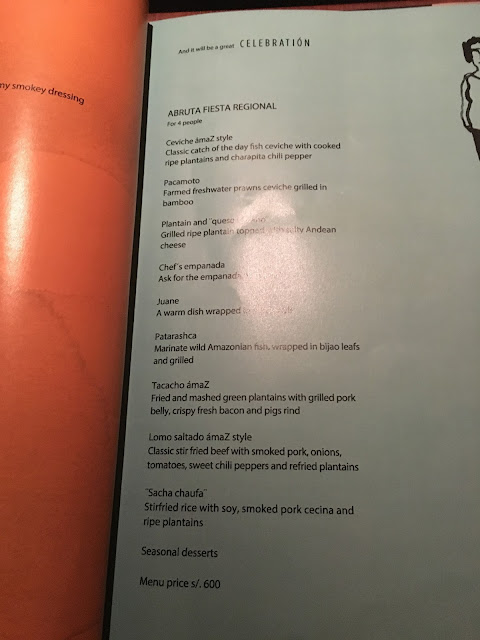 The rest of my birthday weekend was spent bar hopping, clubbing, chillin, getting fat and surfing.

Ahhh there goes a monkey...

What was that monkey doing here?

Sorry for the monkey distraction. Another weird thing that they have in Lima is a cat park (Aaron Levin this is for you). As in gato park (sorry, gato is Spanish for cat). There are just hundreds of cats chillin in this park.

And now lets move on from Lima to Cusco. They call it the land where it rains llamas, alpacas and baby goats.

And thats all I'll say about Cusco for now. I'll save the rest for next time...

Oh did you even notice that the map I posted was of Mexico and not Peru. God, I hope so. I leave it to you to look up what a map of Peru really looks like.

But I will show you a slow motion video of me jumping into the crocodile infested Bolivian jungle river: