Don't Drink the Water....There's Local Bacteria In It 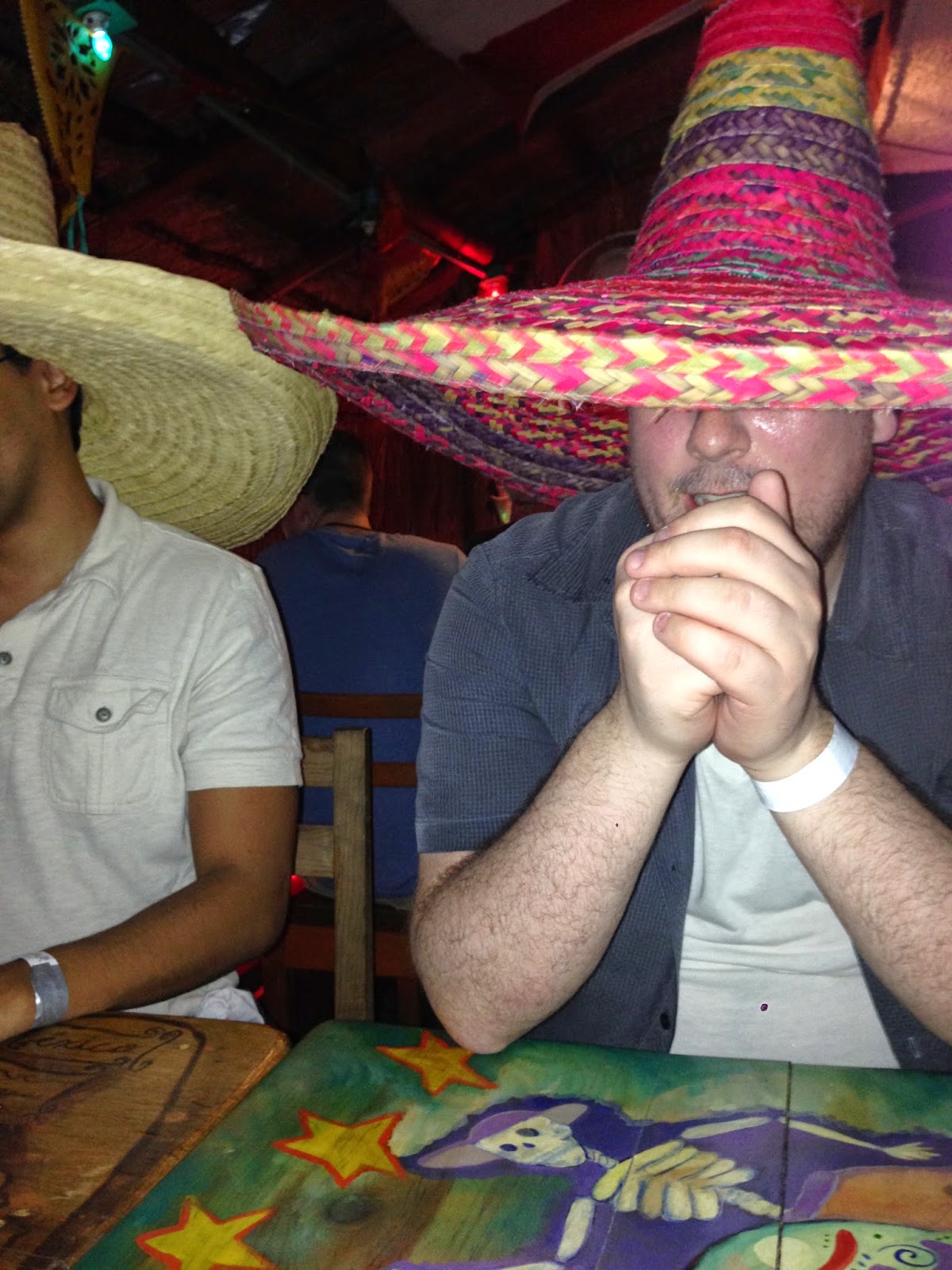 Well he decided to get hitched. Take the plunge. Tie the knot. Get married. Hook up the ball and chain. Put his sex life in a locked box.

So, he needed to have a bachelor party. Since they don't allow Google Glass in strip clubs, we headed to Isla de Mujeres. An island off of Cancun, known for two of the following three things: scuba diving, sea food and loose women. And Mexicans.

Look at that beautiful fucking color. Isn't it the shit? 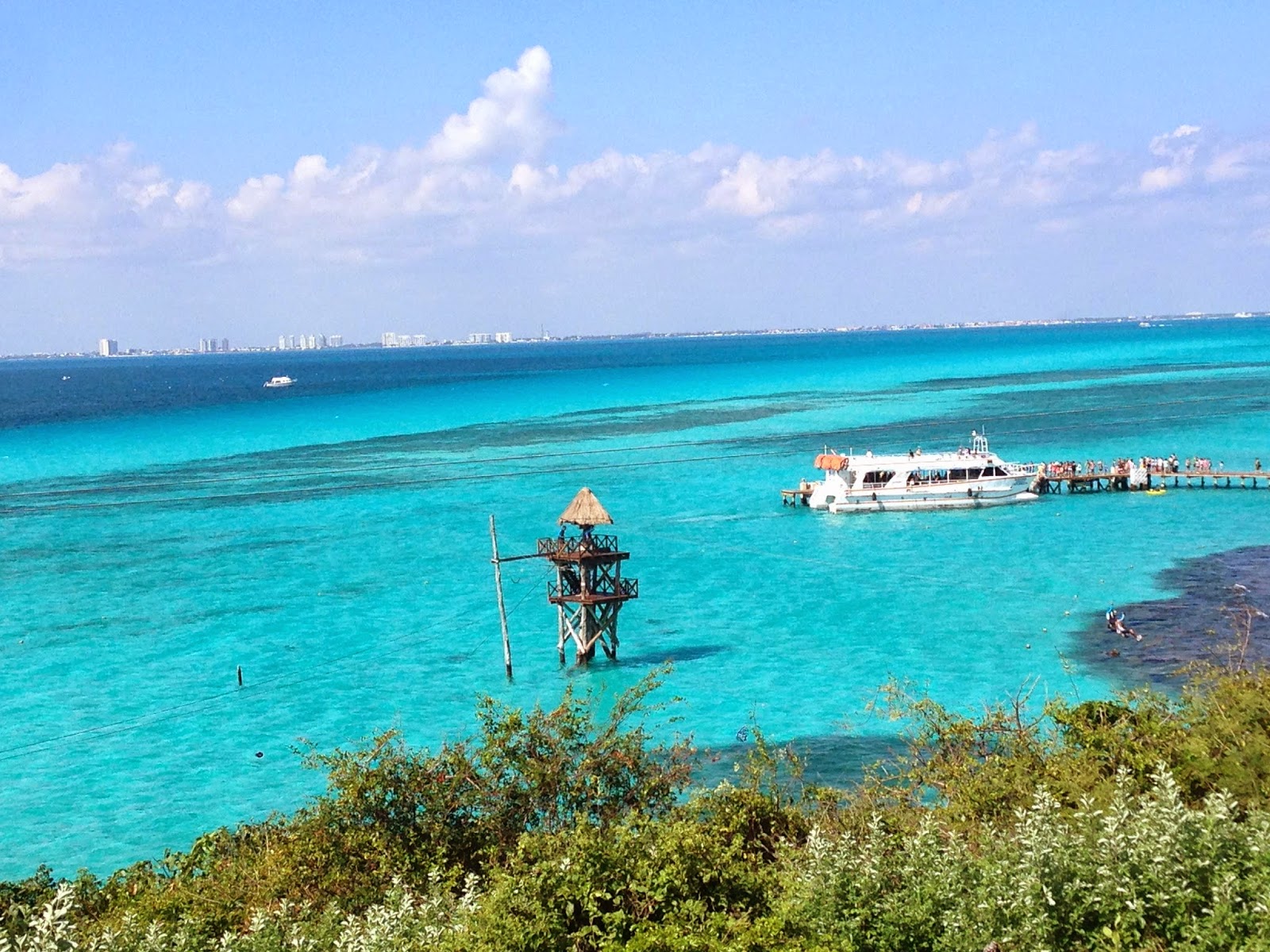 Well we were only there for a weekend, but we managed to pack in at least a long weekend's worth of activities in. And on the very first activity, I was already burned (and drunk). We had to take a boat over from the main land (since an island is surrounded by water) and we sat on top. Done. Burned. Red. Ouch. But in my defense, I'm really white. That's not really a defense.

The rest of the day was spent eating, drinking, swimming and drinking. Also curling up with my fellow bachelor partiers to enjoy the sunset. Awww. 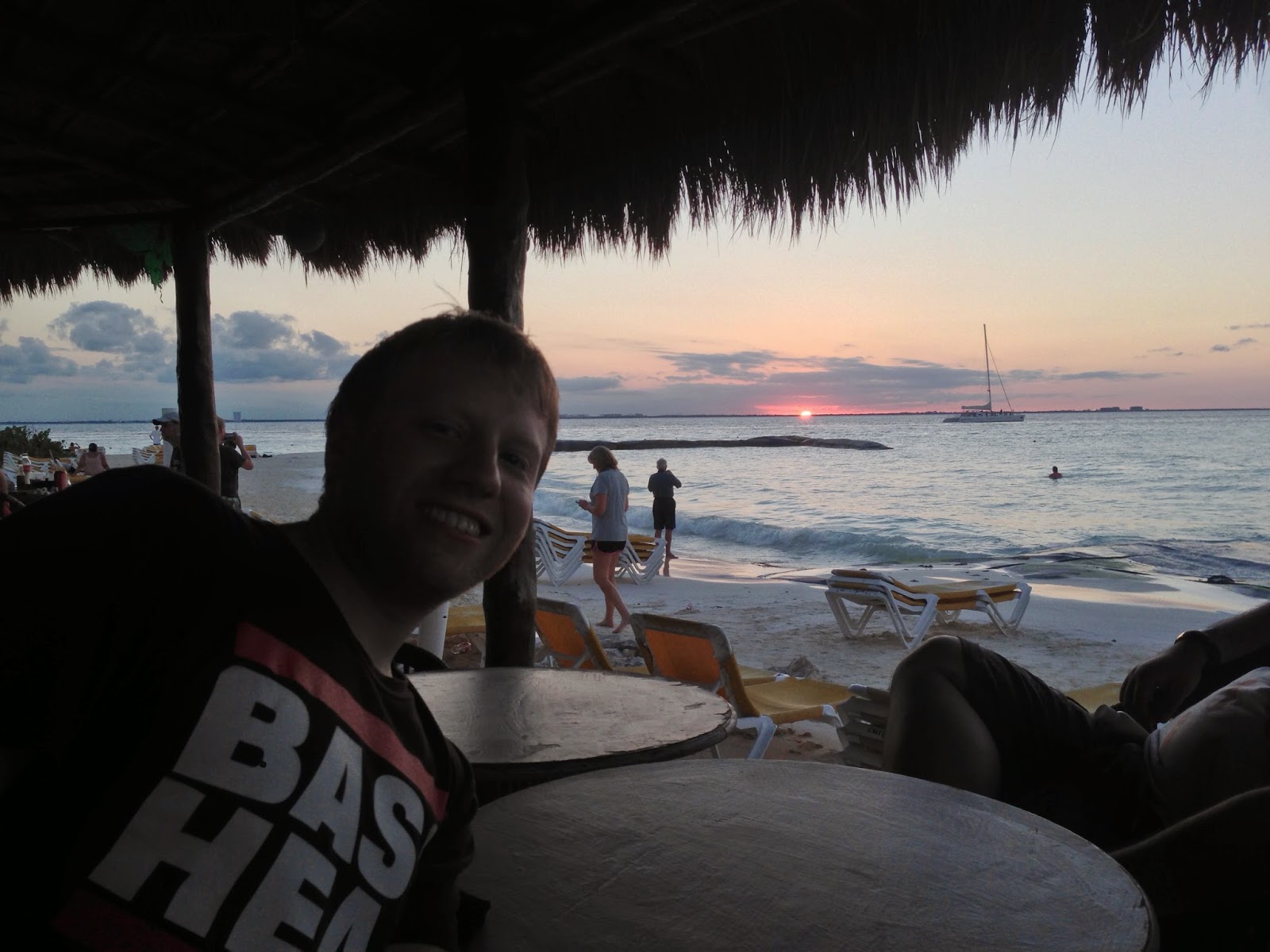 You can't see it, but I'm being embraced by a drunk groomsman

We finished the night with drinking and a good ole game of Cards Against Humanity. The next day, we're up early for taco's and scuba diving. 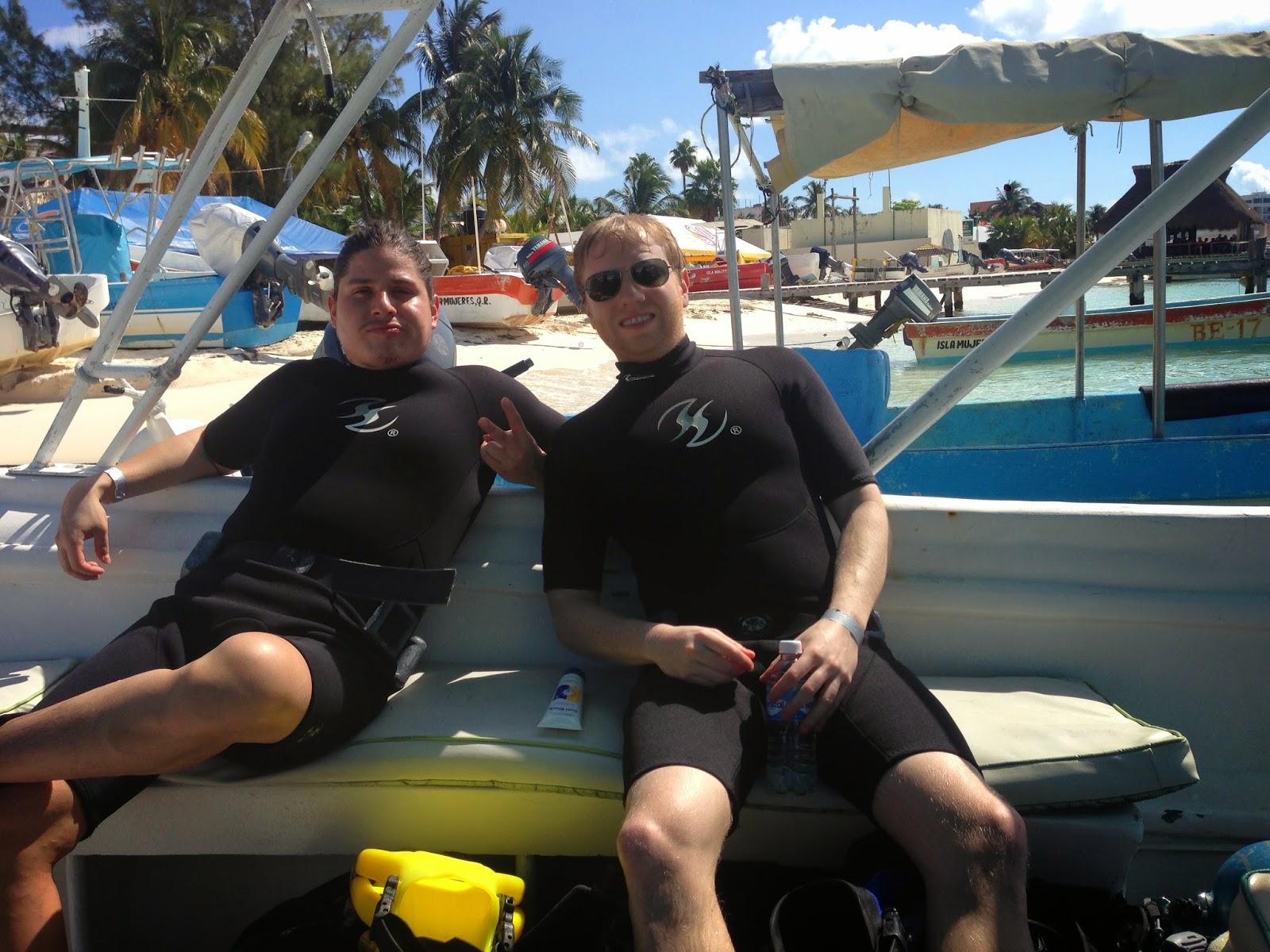 I'm a little bit sexy and I know it

And then we got back to drinking....and eating. I seriously put on 37 pounds while I was there. This is what I looked like after. This is not an exaggeration at all.

I'm hideous and I know it

I ate so much fucking food. I ate giant sticks of meat. Giant tacos of meat. Giant Burritos of meat. Giant vegetarian meats. And fried bread with sugar on it. And Churros. And this was all the real deal Mexican shit cooked on the street in front of you. So you know it low grade shit you're eating. 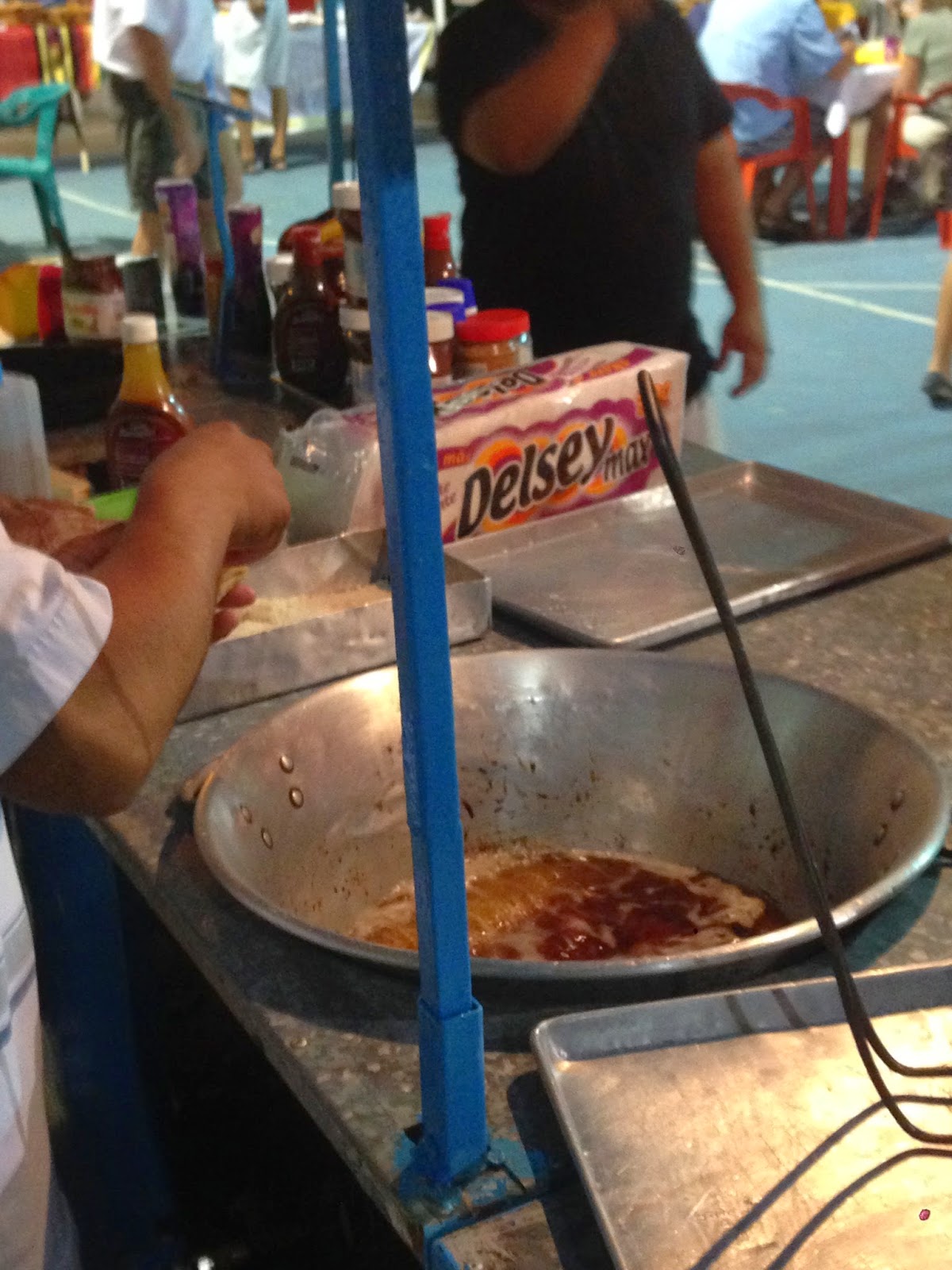 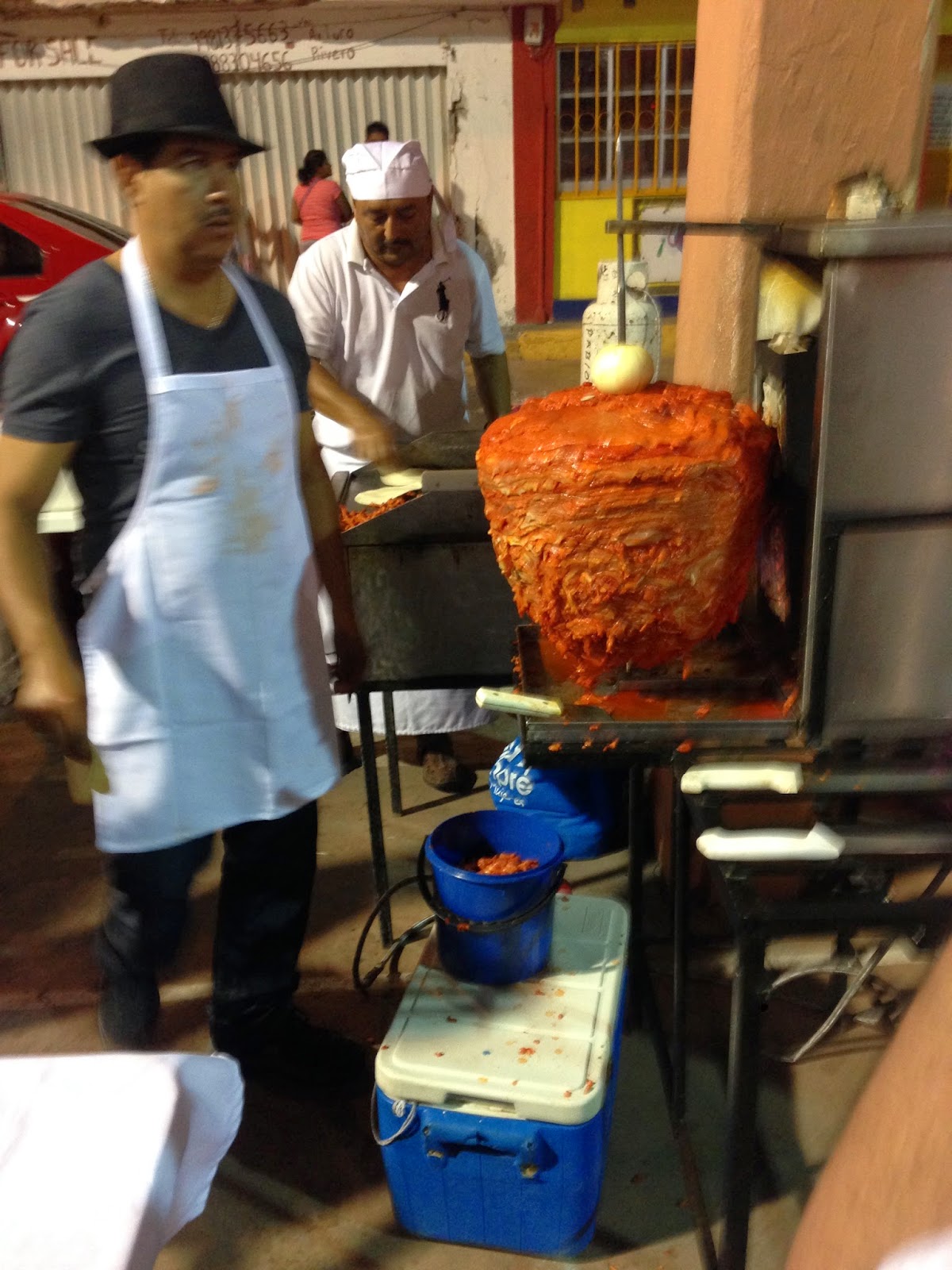 But the one thing that I couldn't find...until the very end was Tortas. And when I did finally find and have one, it wasn't even good. It was just a ton of meat on bread. Those Mexicans need to take a lesson from the NYC street vendors and learn how to make Mexican food. Who's with me?

In general, there seems to be a lot of Mexican beers in Mexico....except Corona. It's like the Mexicans got together and decided to ostracize Corona cause its the most popular in America. Dos Equis....no problem. Pacifico....everywhere. Negra Modelo....have another. Corona....oh there's one shop on the other side of the island that has that. But who's gives a shit right? I already have what I need for my picture... 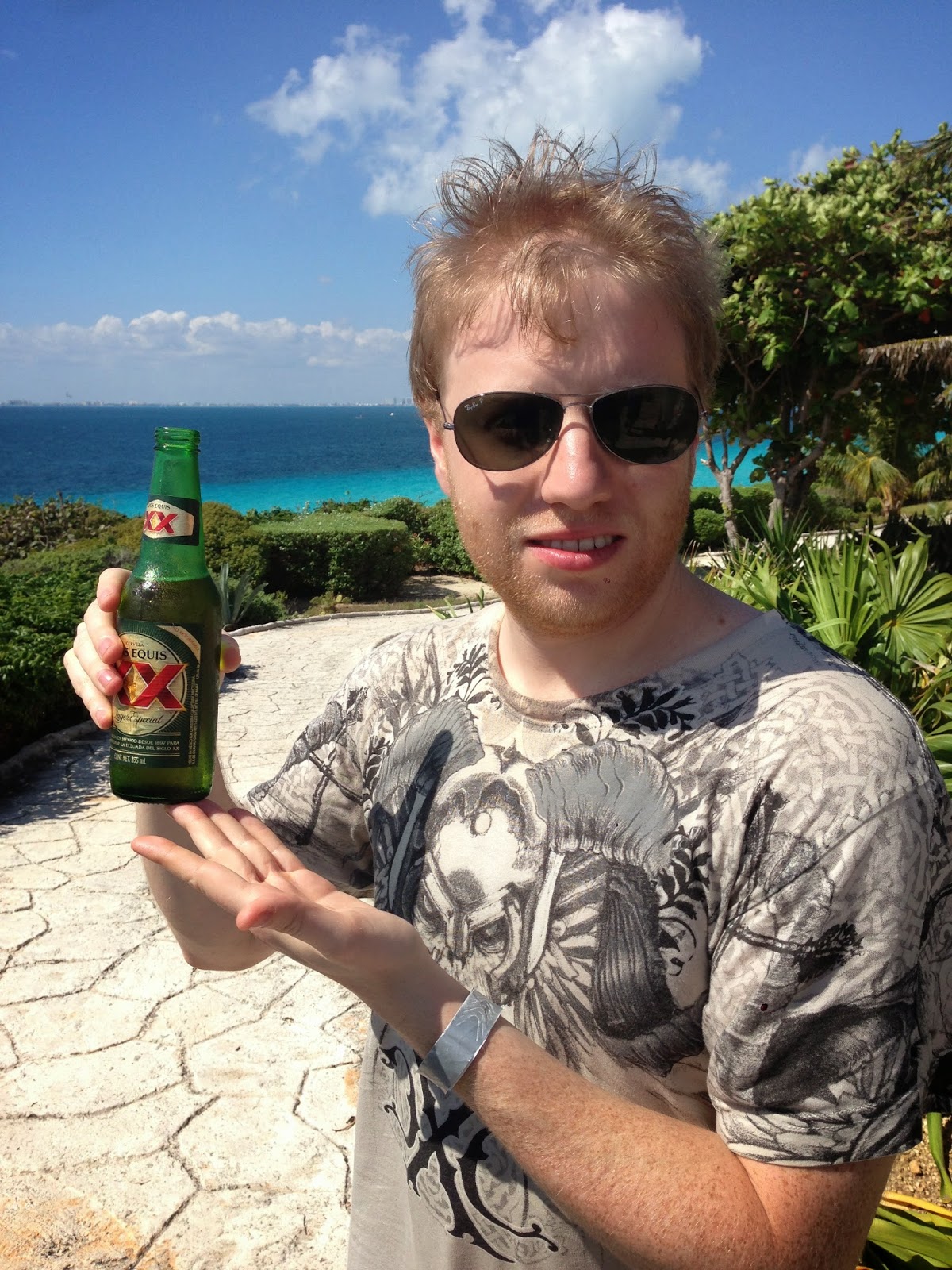 I don't always take pictures on vacation, but when I do, I try to pose so that I can make a cliche caption.

Sunday! The last day of our 2.5 day trip! We rented golf carts and rode around the tiny island. As this was Mexico, and I have problems, I felt obligated to drink and drive. Don't worry, it's just a golf cart. And I couldn't even knock that guy over when I hit him going full speed. 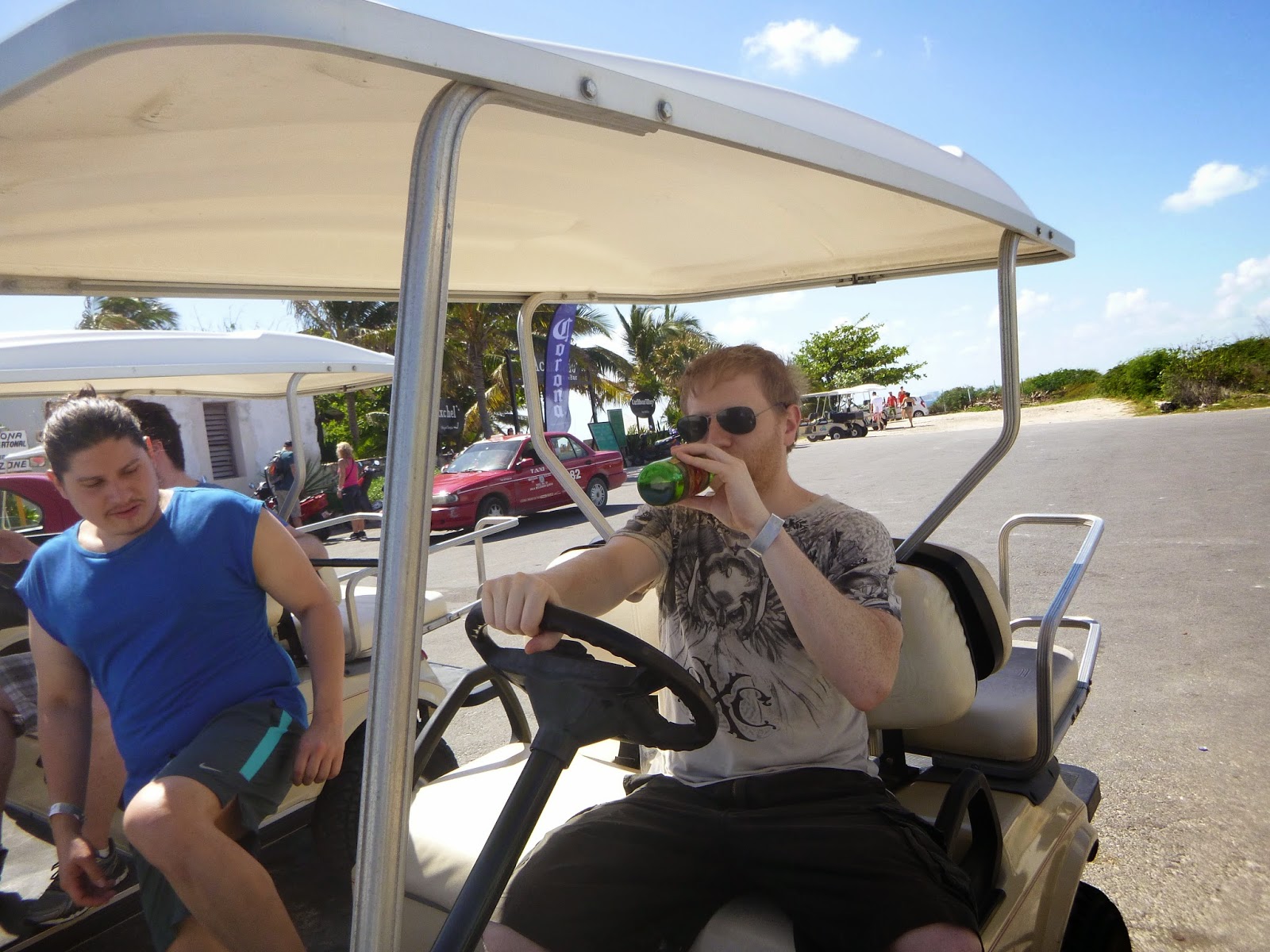 But I did get to pose for some beautiful shots in the beautiful landscape. I am sending these to a modeling agency that appeals to albinos getting over their fear of the sun. 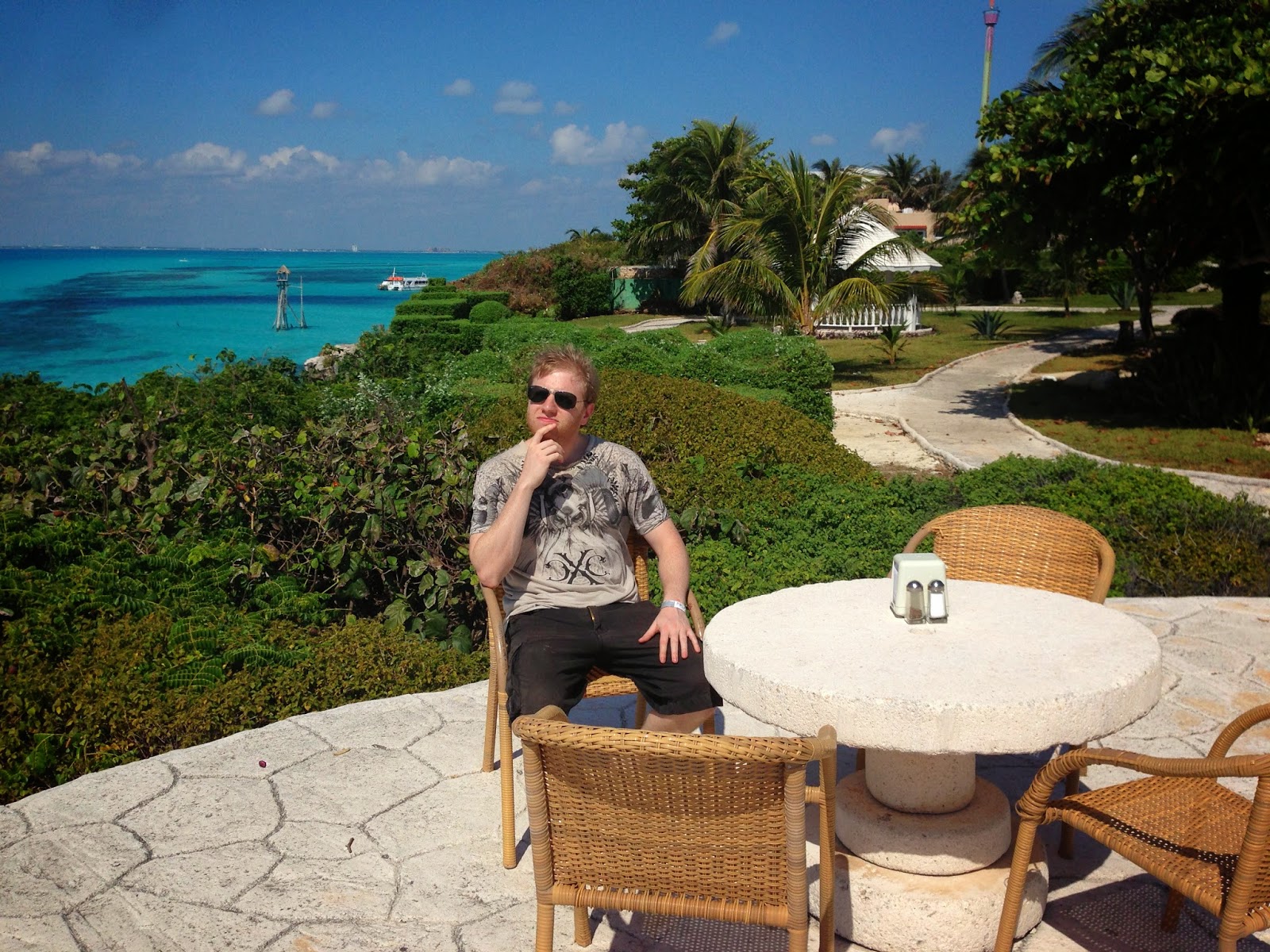 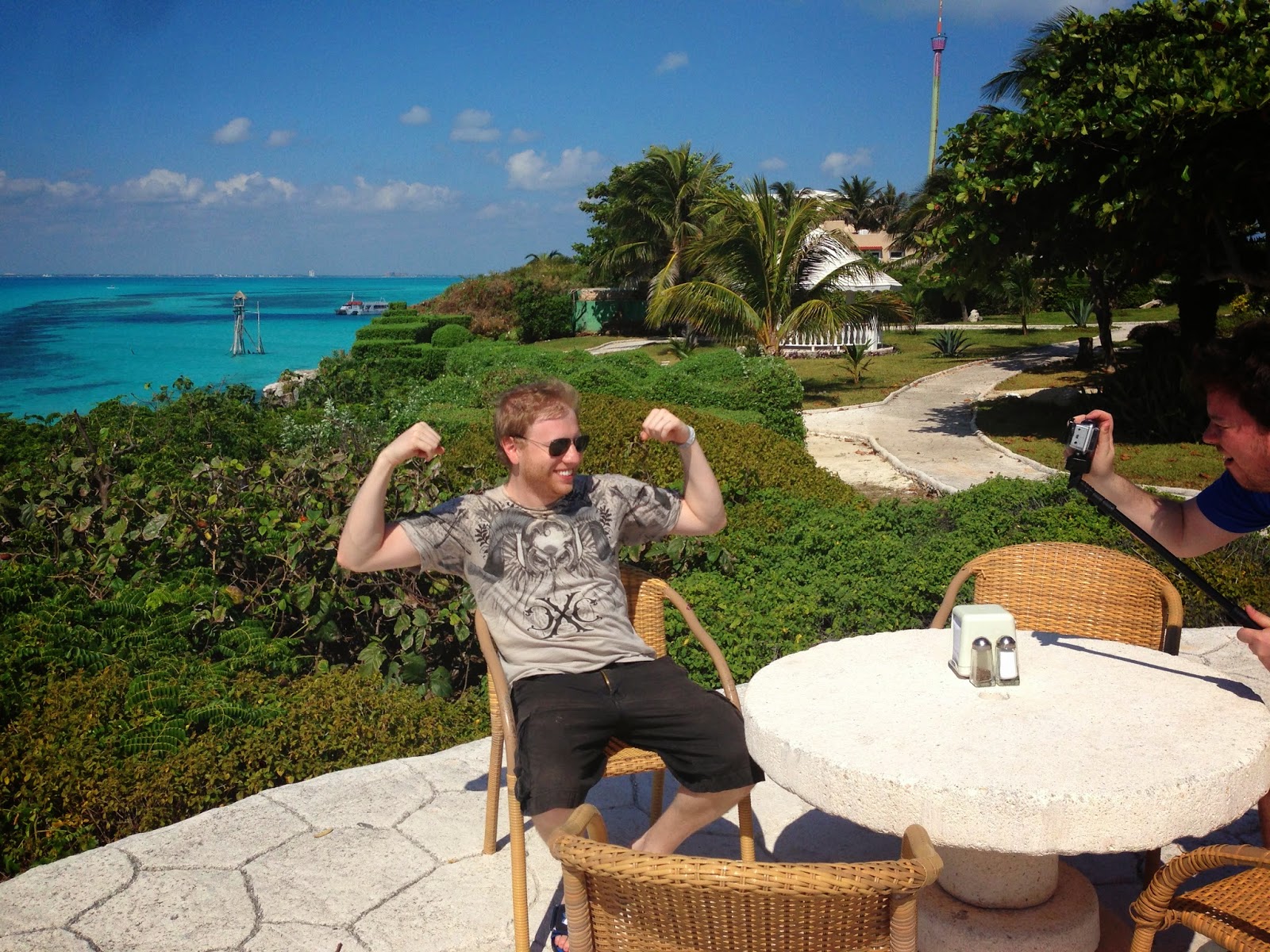 After all that somewhat fun in the sun, it unfortunately had to come to an end. Just like Frankie's single life came to an end. And so, being the good hosts that they are, the Mexicans simultaneously reminded us not to take liquids on the plane and become alcoholics. 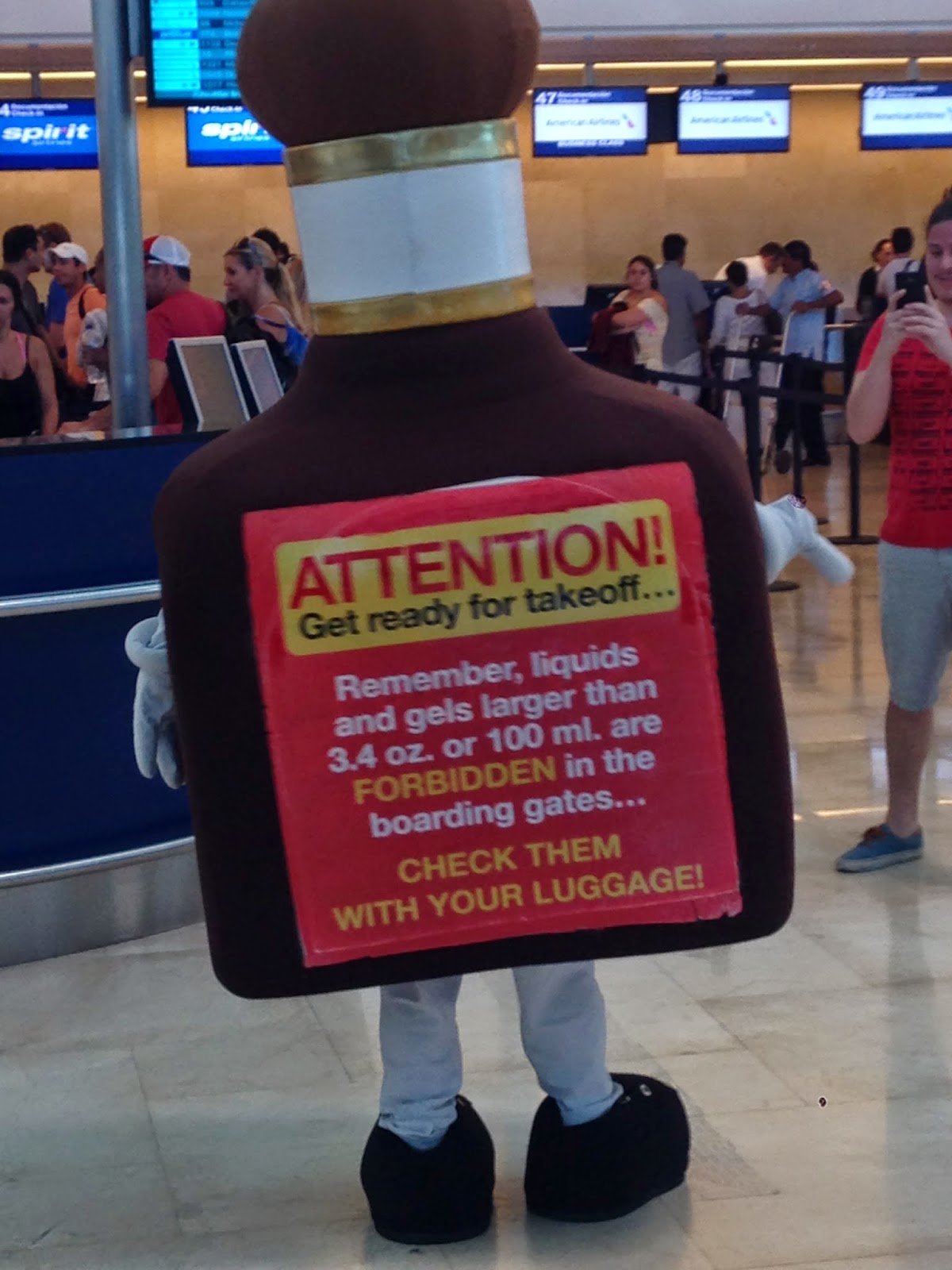 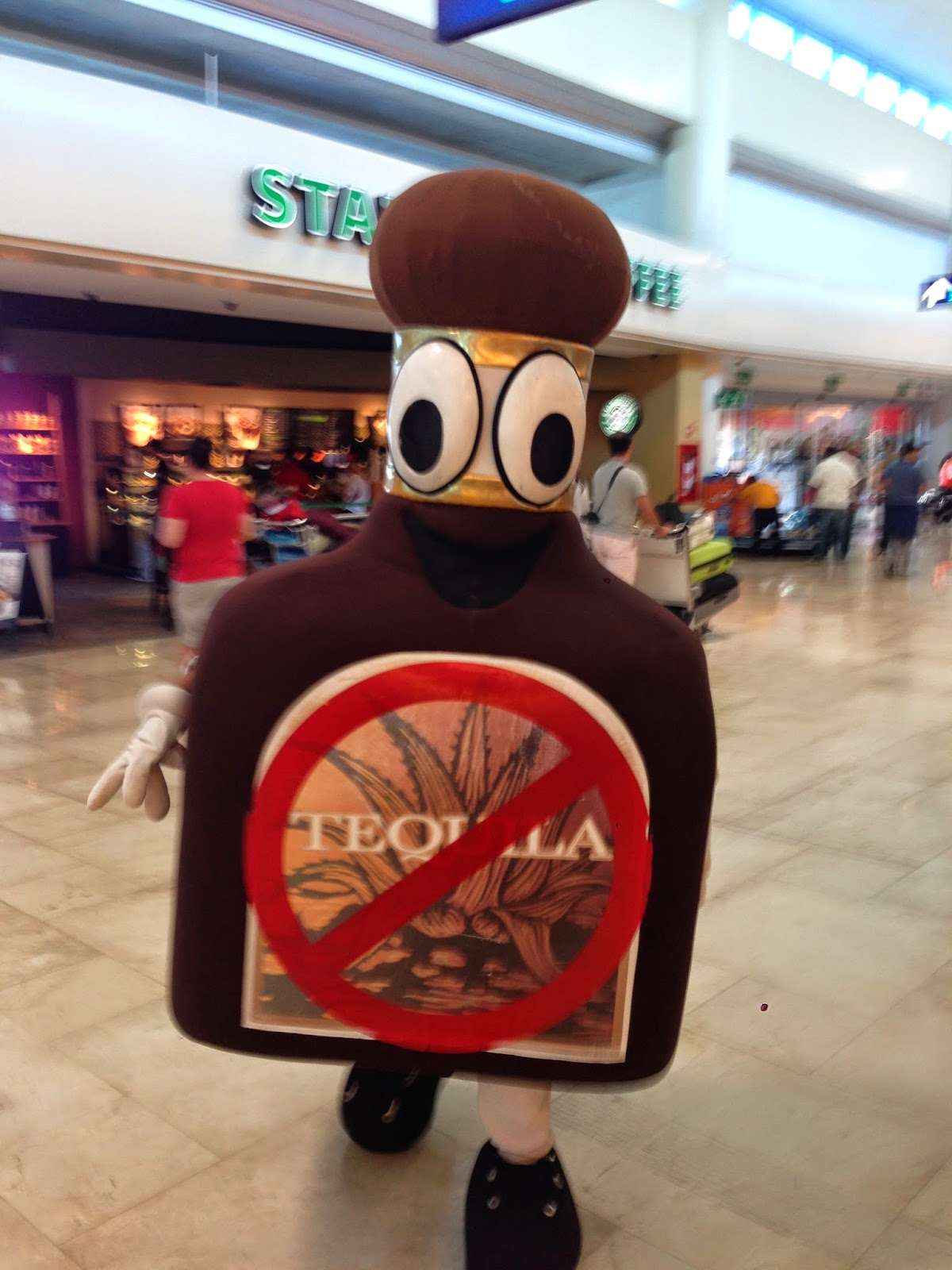 And finally, whats wrong with this picture? 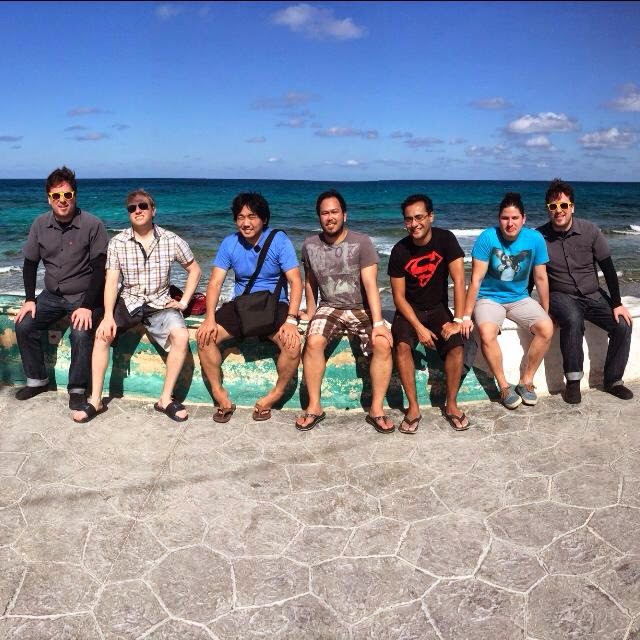 If you would like to find out how you too can create a picture like this using just your iphone, email me at itsreallynotthatcool@gmail.com and allow 6-8 months for processing.

Posted by Unknown at 8:03 PM No comments: