Jamaica we have a bobsled team

In a remote part of the world, I once heard the phrase "a picture is worth nine words". I did not believe this until I took this picture in Jamaica several years back.... 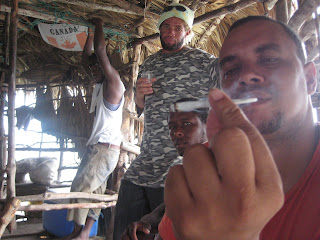 I think its clear what nine words this encapsulates; "Welcome to Jamaica and have a nice day....mon".

When my buddy Ethan says he wants to go to Jamica and I can get a discount for an all inclusive resort for $59/night through my company, it doesn't matter how white I am; I'm gonna go. So thats what happened this past May, 2013 (the year of our lord). We stayed at the Riu in Montego Bay. We were greeted by a nice lady handing out a cup with half sugar and half rum (my dentist was not happy). And from that point forward, not a waking hour passed without consuming some sort of intoxicant. There were red drinks and green drinks and shot drinks and  Red Stripe (hooray beer), and they were all included so we kept drinking them.


We made lots of new friends from all over the world. 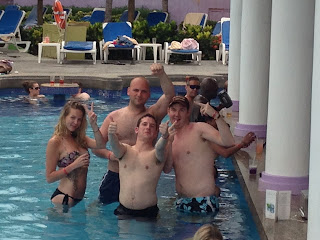 And we played with them in the pool.

Everyone was not our friend however. In fact some people were not nice at all. That's cause they were local Jamaicans trying to rip off the white man. Which I can't blame them for considering how much money we have and how little they have. But, it still doesn't feel good.

So, there were these locals at the far end of the beach at our resort who hung out there everyday (although they're not supposed to) and rented jet skis. So one day, I says to Ethan, "lets rent those jet skis". So we get hammered and walk over to the jet ski renters. We negotiate with them for a while and using our Hebrew instincts work out a price for one hour each. So we're riding around and having a grand old time, but after 30 minutes one of the dudes comes out and tells us its time to come back in. We argue for a while. I use my best Jamaican accent. But we eventually come back to discuss. Once we get back to shore they kick us off the jet skis and start making claims that we only paid for 30 minutes. I totally should have seen this coming as everytime I've bought something from locals in the Caribbean there seems to always be some kind of rip off. We argue for a while and yell drunken things, but to no avail. I'm still wearing their life jacket, so I tell them I'm keepin their life jacket. Yeah! I showed them. They said they didn't care, but I could see them holding back tears.

So we walk back down the beach to our resort and the dudes are down there chillin. They come up to me and tell me to give the life jacket back. I say no. He tries to grab it. I slap his hand away. He cocks back to punch me, but looks around at the resort people and back off saying "I'm going to find you on the street and get you." I tell him that he can't touch me cause I'm wearing a life jacket (see what I did there). But I quickly become terrified as I realize this isn't the US...its Jamaica. Mother fuckers get killed here. My fear is intensified by a local Jamaican guy walking by telling me that I shouldn't be doing that shit here cause there's no rules in Jamaica. So, for the next half an hour, I'm pretty scared for life, kicking myself for doing that. But, I talked to the staff and they tell me that no one touches tourists down there cause thats what they rely on. And in the end, he did not find me on the street and kill me. Whew.

Another good story happened that night. We took a taxi to one of the night clubs in the town. And by night club I mean Jimmy Buffets MargaritaVille. Yes! Actually it was really hard core and packed with people. There were prob more Jamaicans there but I assume they were there for the white peoples money. So we dance. We drink. We dance. All of sudden this tall beautiful Jamaican girl comes up and starts dancing with me. I think to myself, "wait this doesn't happen to me". But we dance for a while and do some talkin. At some point I say we should take a picture... 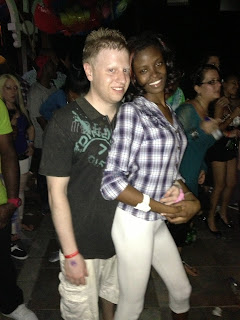 Yeah...my hair looks messed up. After we take this fabulous picture. She says (imagine this in a Jamaican accent), "ya know its customary in Jamaica to pay $20 to take a picture with someone." Can you believe it? That seems really expensive for a photo. But hey, that the rules. So I obviously paid and went on my way....I'm kidding. But I was pretty dissapointed cause I thought she liked me for me (tear).

So the night continues and Ethan gets waaay too drunk and takes a cab home on his own. I decide to leave at around 4AM and as I walk outside the club, I notice that I'm pretty much the only white person left. And then I'm mobbed by tons of locals. Cab drivers, prostitutes, people selling stuff. They start arguing with each other and working out deals...like a prostitute and a cab....or a necklace and a prostitute. You do the math. I'm just looking for a cab home, but obviously I can't pass up the prostitute and cab deal. I can't afford to not do it. Kidding. So the cab drivers start negotiating with me and with each other. All of a sudden one of them says, "I'll let you drive". Mind you, its 4AM, I'm hammered and their steering wheel is on the wrong side of the car. Great idea! FYI - I decided not to take his offer.

Other than drinking heavily and partying and trying not to get killed by locals, the other thing we did was go snorkeling. We went on this catamaran with a bunch of peoples and did some quality fish seeing. The highlight of that trip? The drinking... 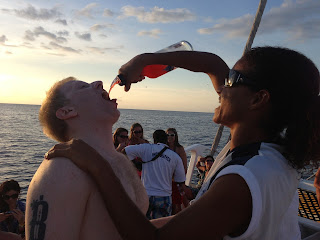 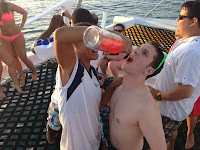 So really, what I am trying to say is that we're alcoholics and I am going into rehab and this is my goodbye.

Another thing about Jamaica...they really hate the gays. On our snorkeling trip, the camera guy didn't like the fact that two guys were travelling together without any girls (I guess I didn't really like it either). Every time we tried to pose with like an arm around the other, he would take are arms and have us do like a fist bump instead. So we tried to get more and more hugging pictures.

So, good trip. But next time I would like to go someone place not so alcholy. Maybe somewhere in South America with some hiking and seeing cool stuff. We'll see. And feel free to reach out if you would like to go with me and appear on this awesome, ridiculously popular blog.

In case you were wondering...yes, we were the two whitest people in Jamaica. 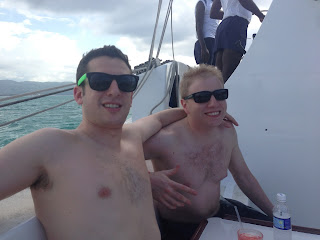