Iceland: the most average scenery possible

Preface: Apparently I have this random obsession with taking pictures with my arms spread out in a Christ like-pose, so I will be peppering some in through this post. 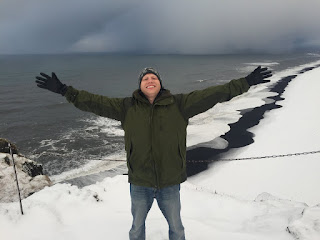 
I'm going to tell you a story. And you will listen to my story. Or you will just scroll down to the cool pictures below.

Ingólfr Arnarson (yes that Ingólfr) was a slave trading Norwegian chieftain. Like many of the medieval Norseman who settled in Iceland, he raped, pillaged and took slaves in Europe. You might call these people.....vikings. 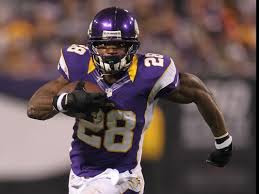 Representative of a true viking?


Note: from here on out I will refer to Vikings as "Adrian Petersons".

So ole Ingólfr being the classy guy that he was...he throws two carved pillars into the Ocean and told his slaves to go find them and wherever they are found is where he will build his home. So his slaves go and search for these pillars for three years (great use of time),
and they find those pillars and Ingólfr names the place Reykjavík, translating to "Cove of Smoke", named for the geothermal stream rising from the earth there. Some time goes by. More Adrian Petersons arrive with their slaves and women they rape. Yada yada yada (eða eða eða in Icelandic). A financial crisis happens. And then Matt Levin arrives!

Then Matt Levin leaves. The End.


I'm not actually sure of the historical accuracy of all that so don't quote me. But in a totally unrelated matter, I recently visited Iceland for five days with a group organized by Map And Move.


It was quite early in the morning when we arrived, so our Hostel wasn't open yet. So we did what you do at 6AM in Iceland....we went to a geothermal pool. Reykjavík has 17 geothermal pool spots. Basically outdoor hot tubs filled with geothermal heated water. It was lovely. Then the sun came up four hours later. Yeah the sun rose at 10:30AM and set around 4PM. It has something to do with El Nina I believe. The rest of the day was spent being tired, checking out the one touristy thing in Reykjavík.

And taking a walking tour of the city. Here are the things I learned on said walking tour....


1) Iceland only has like 300,000 people
2) Iceland has less than 1,000 prisoners
3) Reykjavík police don't do much. In fact they do so little that they have a following on Instagram showing how little they do
4) Iceland has real live Unicorns
5) Icelanders give their children last names based on the father's first name. So my sons' (I will have many) last name will be Mattson and my daughters' (I will have few) last name will be Mattsdóttir (sound it out....I'll wait.         We good?). And its tradition that the first born son take the grandfather's first name so since my father's name is Sid,


By the way, one of the above facts is a lie. Its up to you to determine which one, otherwise you will be spreading terrible false rumors. Here's another picture from Reykjavík.

We also had a thanksgiving dinner with some rando Americans complete with the traditional Iceland Thanksgiving horse meat.


We rented a car and headed out to our first destination: Seljalandsfoss Waterfall. I quickly learned that foreigners can't pronounce any of the Icelandic words so people refer to the different tourist spots by their first letter as in 'The one that begins with a S' . 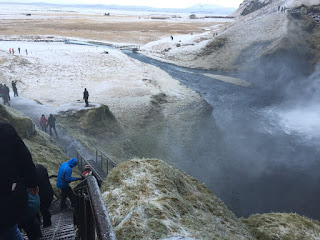 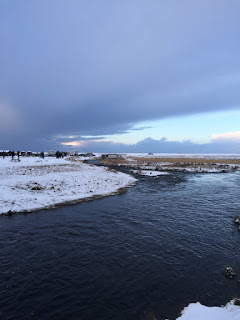 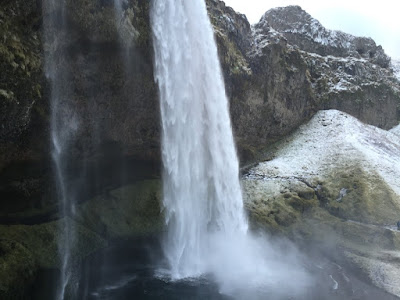 Next up was Skógafoss Waterfall (the other waterfall starting with s).

We drove up a mini mountain to get a good look at this rock. And the full view from the top was really the highlight of the trip. It was just a good climax to the day of seeing so many awesome sights. Looking one way, there was black sand beaches, looking another was Dyrhólaey rock and back inland were endless mountains. 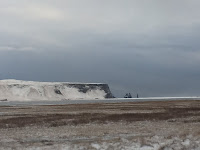 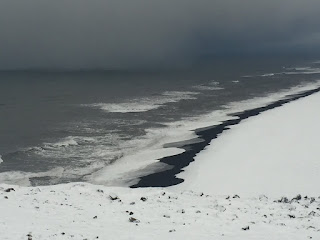 That night we stayed in an Air B&B out in the middle of nowhere Iceland (Kirkjubæjarklaustur). It was the only place around for miles and miles. But of course it had a hot tub and TV and other modern amenities. 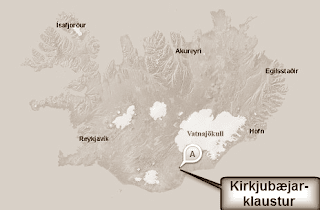 The day had been a little too awesome, so naturally we got a flat tire that night. Oh Vishnu (or Allah) (or Jesus) (or Queztalcoatl, the Feathered Serpent) (or Zeus) (or Spaghetti Monster).....couldn't you just let me have that one complete nice day?

Day 3: Glaciers (or glass-E-ors as the brits pronounce it).

We woke up early and headed towards our Glacier hike. It was apparently the spot where parts of Batman Begins, Interstellar and Game of Thrones were filmed. It was called Skaftafell (the one that begins with a 'S').

Here's some pictures I took while filming my major motion picture there. 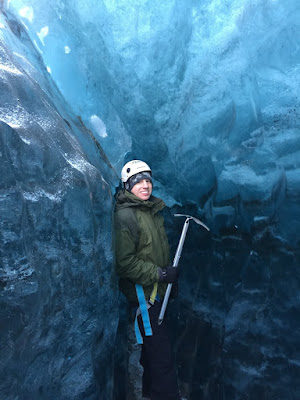 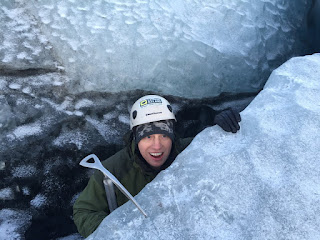 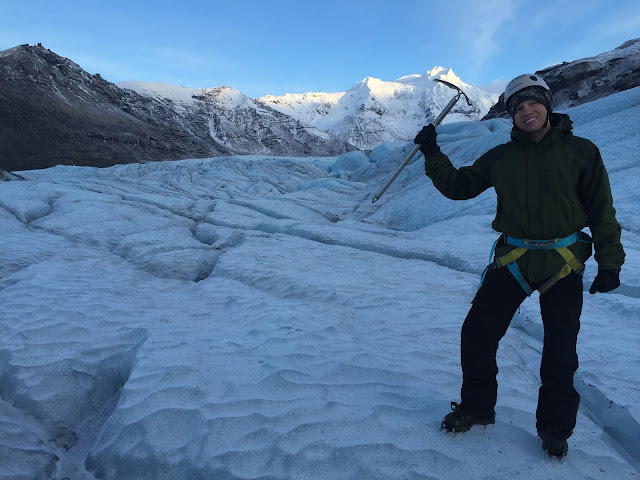 We've got a quarter of a christ there 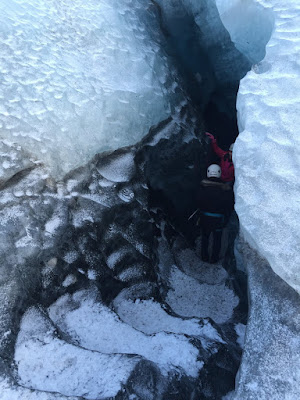 Here's our guide (who was pregnant) who would have had to save us if we feel in an ice hole (official term). She's showing off her crampons. 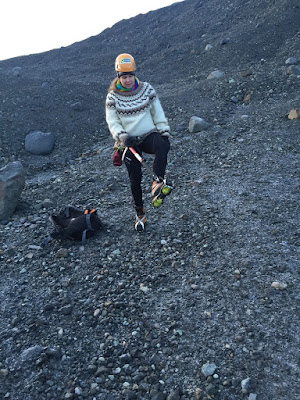 A famous saying in Iceland is: "the only thing to do after hiking a glacier, is go see another glacier" (may not actually be famous. Or a saying). So we headed on over to Jokusarlon (the one that begins with a 'J'). This one was melting into a lake and forming icebergs....so it had that going for it. 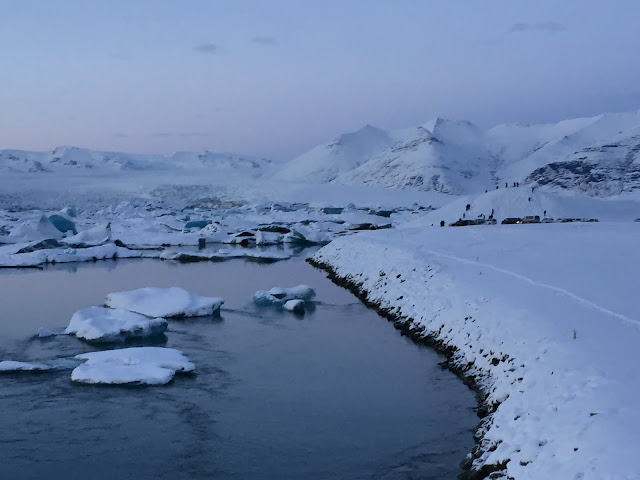 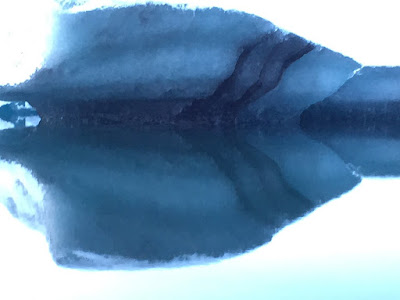 Really nothing interesting to see here. So moving on....

Just across the street from the one that starts with a 'J' was this black sand beach with the ocean forming ice blocks on land as the waves hit the beach. 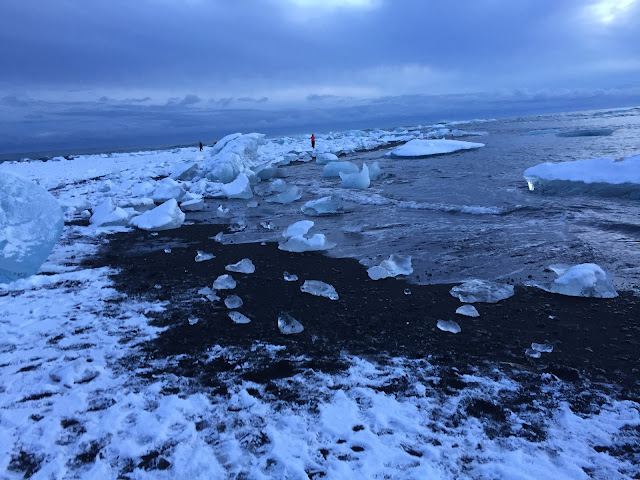 That night we stayed back in Reykjavík and learned that the Icelanders have a dark side. See we basically only saw one cop the entire time we were there. I thought this is because there was no crime in Iceland (which seems true actually for more serious crimes), but turns out they like to get their drink on. The peak of the weekend night (when most people are out) in Reykjavík is around 4AM and many stay out till 7AM (which is not actually staying out till sunrise cause the sun doesn't come up until 10:30AM this time of year). The Reykjavíkians drink heavy and fight.


And these are people descending from the Adrian Peterson's so they are big mother f*ckers. And oh yes, there is blood. And there are people slinging dope (as the kids say) on the street and just general mayhem. As the saying goes, "don't go out in Reykjavík on payday cause people be spending their paycheck on drinkin" (I made up that saying but its based on the advice of a travel guide).

I still don't exactly know what the Golden Circle is....apparently its just a small area with a lot of stuff to see? I wish there was some way to lookup the answer to questions I had like this.

We hit 4 things in the Golden Circle. I will call them Fault line, Geyser, Crater and Waterfall.


First up was Fault line:

Next we saw Crater: 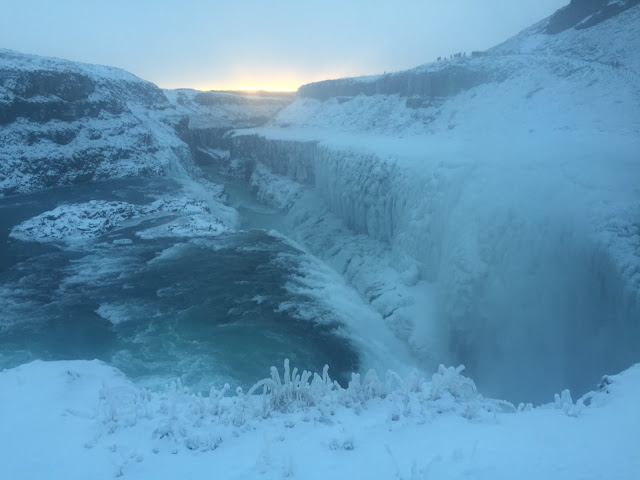 And thus completed the Golden Circle.


Later that night we went hunting for the Northern Lights. You may know them as....'Aurora Borealis'.... or perhaps...'something else'. There are two indicators that go into the Northern Lights forecast; particle activity and cloud cover. Here is a helpful site that is used to know when the lights will be out: http://en.vedur.is/weather/forecasts/aurora/.


That night, the forecast was at a 3. Here is the picture of the Northern Lights I took that night:

Pretty magical. With the naked eye, it basically just looked like a cloud across the sky. The night after we left it was supposed to be at a level 5 which is pretty awesome. Oh, but a better camera captured this: 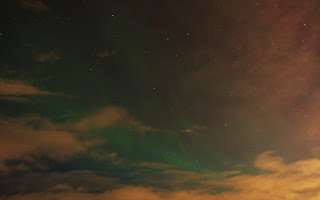 And an even better camera captured this:

but I just took that picture off the internet.

And that was Iceland.

Oh, one more thing: I will be traveling the world for a year starting in March with RemoteYear (did your head just explode from awesomeness?), so expect a lot more blog entries soon. Lucky you! Here's my itinerary:

This is the last thing, I promise....here's a cool timelapse we took when driving....

Posted by Unknown at 4:19 PM No comments: